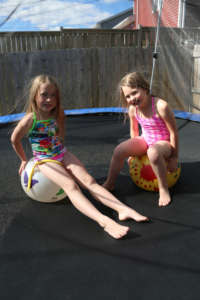 You’ve just purchased a new trampoline. You assembled it properly. Now you’re ready to have some jumping fun.

Except after a couple of weeks, just going out to jump on the trampoline isn’t as fun as it used to be. You begin to add some flips, spins, and other tricks to keep having fun.

And then, after a while, even that becomes kind of boring.

You’ve spent hundreds of dollars for the best outdoor trampoline and you want it to be a meaningful investment. How can you maintain the initial fun that this equipment once provided? By taking advantage of these fun trampoline games.

Think of this trampoline game as a way to wear out the kids. Have them compete in a side-by-side bounce battle. Have them do simultaneous seat drops. Then keep going until one of the kids wears out and can’t keep going. Make sure the winner gets a nice prize (say, 3 pieces of candy) and let the loser have a prize too (like 1 piece of candy). That way it was fun and everyone gets a good night of sleep.

Get everyone onto the trampoline (be wary of your weight tolerance). Then play this classic game with a trampoline twist. As with the non-trampoline version of this game, the last person to keep following the instructions properly is the one who wins – and gets to be the next Simon.

You could play basketball or dodgeball on your new trampoline, but you’ll find that even the large 17-foot trampolines don’t tend to provide enough space for those activities as a group. What you can do is play a competitive game of hot potato. Get everyone onto the trampoline and have a designated person play music outside. When you stop the music, whoever is left holding the “potato” must leave the game.

As an alternative, you could make it be that if a person drops the “potato,” they’re out instead. On a trampoline, you could add a rule that bouncing is required to stay in the game as well.

With a trampoline, you can get some big air. Add in some great dance music and you can have a great dance party. Let everyone have a turn showing off their best dance moves. Let the group self-judge who happens to be the winner or designate an independent judge to see who has the best moves. Then provide some award for the winner because bragging rights sometimes aren’t motivating enough.

A trampoline can provide plenty of fun for years to come. When plain old bouncing gets too boring, add some games like these and you’ll spice up the fun very quickly.